Whoops, that did not go as hoped for.

And well done to those who guessed Gargoyles.
You were right that Pawlush is a Gargoyle.
Goblinscomic transcriptions
Collection of G:AR cards
Top

No really difficult to guess since Elli posted sketches of it on twitter.

Where did Fumbles go? Only time will tell...
aka LooksAndSmiles, or L&S for short.
Top

The inclination of doing nothing, likely not even thinking, may be a good reason why Pawlush is able to cope with the lack of external input in his current situation, and how she/he copes with the experience of having been chained to Kore.

But still, Pawlush found it a hell, and wanted to leave. And apparently had issues with "nobody being there" when that part of Kore's head got ripped away.
Goblinscomic transcriptions
Collection of G:AR cards
Top

Ok, now to speculating. WHAT happened to Fumbles? Do the clocks send you to a certain time? In a space-time continuum, would it also send him to a certain space? Will the rest of the Goblins need to touch the same clock, and if so, did they notice which one it was that he touched?
Also, why did he disappear together with his clothes, but did his staff stay behind? Are the magic annulling effects of import here?

BTW, art-wise, I like the use of the 3D smoke. But really, honestly, who of us would believe Fumbles would depart from us in such an unceremonious way, not so long after finally becoming super powerful?
Top

Oh wait, I guess in retrospect it was inevitable the character named Fumbles would touch a watch. I kind of didn't expect him to do it on purpose!

Is it me, or did the "hands" on the "egg" that Fumbles touched get one division further apart?

Is Fumbles now stuck in the "egg"??? Do you need to get the "hands"of the "egg" to come together to release everyone trapped (I can't see any "egg" with "hands" together)????? Are there other things trapped in there with Fumbles?!?!?!? And most importantly: why are some of the "hands" not on marks? (I wish I could tell if they were real times or not... because on a real clock, if you know where the 12 is, the position of the hour (short) hand is enough to indicate the position of the minute (long) hand (the long hand is there only to make the clock easy to read (trying to determine which 1/60th the short hand on between two number is ridiculously difficult))).


TheOneThatGotAway wrote: ↑
Wed Jul 01, 2020 4:11 am
Also, why did he disappear together with his clothes, but did his staff stay behind? Are the magic annulling effects of import here?

Is this one of those catch-22 things? Fumbles, holding the staff can use it to "destroy magical bindings, thereby freeing the wielder". The "egg" is a magical binding trap: so it can't hold Fumbles if it brings him in with that item... so it left it behind (that's a smart trap). Technically Fumbles needs to touch the staff to the bindings (the "egg" or the green vine attached to the "egg"?)... but can the others use it to free Fumbles? (i.e. free a non-wielder).


Krulle wrote: ↑
Wed Jul 01, 2020 1:56 am
But still, Pawlush found it a hell, and wanted to leave. And apparently had issues with "nobody being there" when that part of Kore's head got ripped away.

Well if there is a constant buzzing noise that suddenly disappears... even though the "peace & quiet" is very nice, initially, you're going to take issue. Also Pawlush is stuck (cannot move voluntarily): that is something you would most certainly take issue with (i.e. want someone to help you with).
Top

I think Fumbles is still there but became a baby-Fumbles (or an old-timer-Fumbles - a Fumbles from another time in his life), and he couldn't hold his staff anymore.
Well, just my wild, unfounded guess.
Top

Booooo!
► Show Spoiler
Actually, that was pretty good
Assuming that the times on the watches are important to understanding what happened to Fumbles, how are the goblins going to figure it out when they don't know what a watch is? Portraying time as a circle with moving sticks is pretty abstract -- it's not something the average person could puzzle out in a few minutes with little context.
Top

One simple augury spell could have prevented this...
Top

Fumbles makes an Intuition check, and... well, his name says it all.

Not pressing F yet, not sure he's dead.

The gargoyle's situation brings up a lot of ideas about free will. A free person can supposedly do whatever he wants, but more importantly, he has the freedom to do that which he may not want to do, but needs to do anyway. A gargoyle likes standing still and not doing anything, but he still has the freedom to act, if he decides he wants to, or needs to. Being unable to move might not be pleasurable for a gargoyle.
Top

The scorch marks on the floor are not a good sign. I doubt that Fumbles will permadie, but it does appear he may be dead at the moment. Perhaps all the watches are ticking along, and when they cross midnight they might undo everything they've done, or something to that effect.

I'm fond of the idea of a gargoyle character, and I'm totally stealing the idea that they find inaction pleasurable.
Top

I am actually hoping he is dead and gone. He has been reckless enough times, so it's really his turn now. Also, that would leave room for goblins with more interesting arcs.
You won't sleep when you're dead either.
Top

That's new epic quest! To kill the time and save Vorpal!
Top 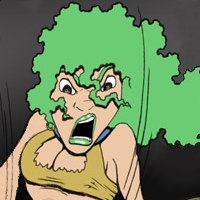 No one is asking the important question!

What happened to the Gnome Egg that Fumbles touched???

Since the images don't really allow me to discern which one he actually touched, I spent no time on the Gnome Egg, and analyzing if one has changed beyond image-to-image changes.

So I went back to the comic, and it seems to me that nothing has changed.
The Gnome Eggs seem to be a background image, that's copy-pasted from panel to panel (and zoomed/resized to fit the camera focus).
Goblinscomic transcriptions
Collection of G:AR cards
Top

Luy wrote: ↑
Fri Jul 03, 2020 6:56 am
Fumbles accidentaly touched a copy-pasted comic background, these work on a different dimension since they are copy-pasted and appear identically at the same moment in different times (different panels). Therefore, Fumbles himself will be "pasted" in a different panel in the following pages.

That sounds a lot like the in comic expositions.

You won't sleep when you're dead either.
Top

And Fumbles will be the background.
While the clocks in the background discuss what's happening, something feels different...
Goblinscomic transcriptions
Collection of G:AR cards
Top

Everything eventually derails, and the players just agree to go back a bit, and agree that thing there was non-canon.
You won't sleep when you're dead either.
Top

~The smallest of pebbles can start an avalanche, but even the greatest of boulders can hit nothing.~
Top

I would have no problem what so ever with those developments.
You won't sleep when you're dead either.
Top
Post Reply
21 posts • Page 1 of 1