Are you coming back to our Pathfinder game??
► Show Spoiler
GM for Children of Ash, a post-apocalyptic survival story.

Seeing as I'm still pretty terrible at hitting the forums with any regularity, I wasn't planning on getting back into any games until I could get myself into more of a reliable schedule (it's just happenstance that I check the forum the same day to reply). It was fun, but I don't want to get myself back into something only to end up neglecting it again and dropping out.

Although, really, it wouldn't be that difficult to get myself back into a schedule and now I'm thinking about it, so maybe I wouldn't be against sticking my head back into the games section soonish.
Top

Wow, I wished I had your talent.
I got good art grades, but more because of the technology I mastered to create art (something my teacher could not do), and the way I explained my lack of interesting being shown in the art I produced.
Goblinscomic transcriptions
Collection of G:AR cards
Top

Speaking of friends, somewhat fantastical sketch of my aforementioned accomplice that I'm pretty sure looks nothing like her. The lighting has issues, and not just because it's hard to get any kind of even lighting with the desk lamp I normally use for illumination. Shadow's definitely a bit out of the place it should be.
[thumbnail]http://i.imgur.com/sUJdese.jpg[/thumbnail]

And if it means anything, technique can be important. Sometimes a surprise is nice, but the rest of the time I've found that knowing what a particular medium is capable of and being able to use it effectively is something to be admired (and something which this person sometimes does not have a grasp of at all.

A few more drawings appear! After letting it sit and forgetting it existed my friend and I are back to the mess we call Okami Plot. In an attempt to get myself back into the action, my really indecisive about her appearance character has had yet another clothing redraw and completely given up on being any kind of recognizable animal in favor of some kind of half-hound, half-unicorn thing because I apparently like being weird too much.... (lies, I tell you, well, the too much part at least.

I love working with the ink pens, but that also leads to my problem: I enjoy them so much that I have trouble stopping shading things in randomly and then I end up with things being giant black swathes instead of just kinda dark. Also, I have yet to figure out what the one with the brush on the end really does except color things in really well. then again, if I need thicker lines I tend to like to build them up gradually because it's easier to see when to stop (well, in theory at least), so it's not one I use too often.

It already has some issues with messing up the outlining (I'm having another go at my potentially disastrous draw an area, decide whether or not I like said area, use the lovely pens on said area strategy where should things go wrong it's very hard to change things unless I notice them right away. On the other hand, I feel more comfortable having fun with the drawing if I don't have to constantly worry about erasing the scribbled mess I call a sketch because it had all the important lines in it just because I want to try something out.), but here's the current work in progress. In a state where I haven't managed to ruin it too much (see the above disaster with the pens).
[thumbnail]http://i.imgur.com/6J0Q1vB.jpg[/thumbnail]

Now, the only problem is this drawing only works as long as my character is angry at her other party members. I'm hoping I can finish it before the next session (luckily, school's started back up. There's less time because everyone is students and has class). It will be weird drawing her if we end up resolving things and I have half a drawing left to do and I'm stuck with her being angry.
Top

drawing done, time for the coloring part
DSCN1534.JPG
You do not have the required permissions to view the files attached to this post.
Top

Small note to self to either re-upload or reformat all the images here once the updates to the forum it looks like are happening have settled down. I think most things I have live in this topic, but I remember there may be one or two I have to go find.
Top

Skyrim: Taking Care of Business
I don't think this is the kind of help Brynolf wanted when he approached the Dragonborn...

This is what I'm turning in for a label design project in Adobe Illustrator. I may have gone a little bit crazy on the second one.
Top

Actually, while I'm at it, here's another one from earlier the same class that came out pretty well. Tracing over a color photo with the pen tool and only able to use different flat shades of black (no gradients or patterns).
[thumbnail]http://i.imgur.com/WJFtJXFl.png[/thumbnail]
Top

Semester project for Digital Illustration class turned out well. I colored a previous drawing. Of course, I can name a bunch of things that I could still improve upon (like not getting the shadow to cooperate without deforming it too much and some of the coat shading not making sense to me), but also I am happy with what happened.
[thumbnail]http://i.imgur.com/gN2GJp1.jpg[/thumbnail]

I've been holding off doing too much drawing until I had finished this project so that I didn't get distracted and neglect it and then not have it finished enough in time, but now I can get back to sketching....and maybe trying to do something like this again where I don't have a deadline because it was actually really enjoyable to work on.
Top 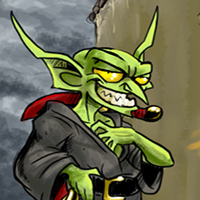 Tea wrote:I've been holding off doing too much drawing until I had finished this project so that I didn't get distracted and neglect it and then not have it finished enough in time, but now I can get back to sketching....and maybe trying to do something like this again where I don't have a deadline because it was actually really enjoyable to work on.

It's smart to put assignments ahead your own projects. I learned that the hard way.

How was digital artwork for you. Did you have any experience with photoshop(Or whatever you used on the course) before going on the course?
I know I found working with a tablet to be a nightmare when I first started getting into digital art. It felt so wrong back then.
► Show Spoiler
You clicked it! Now click the one below. A wonderland of mediocre art awaits!

Actually, the entire class was in Illustrator (although, now you've reminded me I haven't picked up Photoshop in ages). I have been playing with Illustrator for maybe....the past few years and still I am learning new things about the program and enjoying it even more. Also, I think I am the weird bane of all of my classmates when it comes to tablets. Everyone is always telling me about these nightmare things, and I'm not going to say that it didn't take a little bit of getting used to at first, but I think I was having too much fun trying out every brush I could get my hands on with this new pressure mechanic to actually ever have any nightmares.

I like the "doomsday clock".
But best of this set I like the figs illustration.
The cuttlefish looks interesting...
Goblinscomic transcriptions
Collection of G:AR cards
Top

Watercolor portrait who looks nothing like self-portrait it's supposed to be. I'm pretty sure my head isn't quite that shape, and I've almost completely lost my glasses, but it was fun to do paint.
[thumbnail]http://i.imgur.com/NzJpaxlh.jpg[/thumbnail]
Top

My drawing figures finally, finally arrived! (four months after I ordered them....but definitly worth the wait.) Now I can do all sorts of crazy foreshortening and play more with interesting angles, so here's the celebratory first drawing with one of them (friend' drew her character in a swimsuit, sent one of mine to go join her.)
[thumbnail]http://i.imgur.com/IuN1DdV.jpg[/thumbnail]

► Show Spoiler
So, of course I also had to play with posing them, which went well.....until they noticed that I'd left this nice ball of yarn on my desk.... *sigh* Guys.....Guys! Please try not to get too comfortable there!

Have been busy with school lately, so not so much drawing. Character portrait for A who has been spending too much time poking her nose into Pathfinder lately (on the other hand, I now have an alchemist character who sounds really fun to play with). I need to work on backgrounds....maybe the next one.....the next drawing will include more interesting pieces of architecture (hopefully). On the other hand, clothing is getting less tedious.
[thumbnail]http://i.imgur.com/zAdjFu0.jpg[/thumbnail]
Top
Post Reply
45 posts