BadgeAddict wrote:I don't know if the images from this site are free to use, but you could at least look at them and pull ideas about different ways to create the effect of trees, cities, mountains, etc...

Well... I can answer that.. the map are NOT for free use (except for private, non comercial use)
Many of the cartographers (People who makes maps) on that site are highly professional.. If you search in there you'll among other things find the guy who made the extremely impressive map for Game of Thrones...
The site also have ton of great tutorials on map making both for Photoshop and GIMP... but all be aware of the river police in there

Yep Cartographers Guild is an amazing resource for anyone wanting to get into making maps.

Here's one I did after playing around with some of the tutorials on that site: 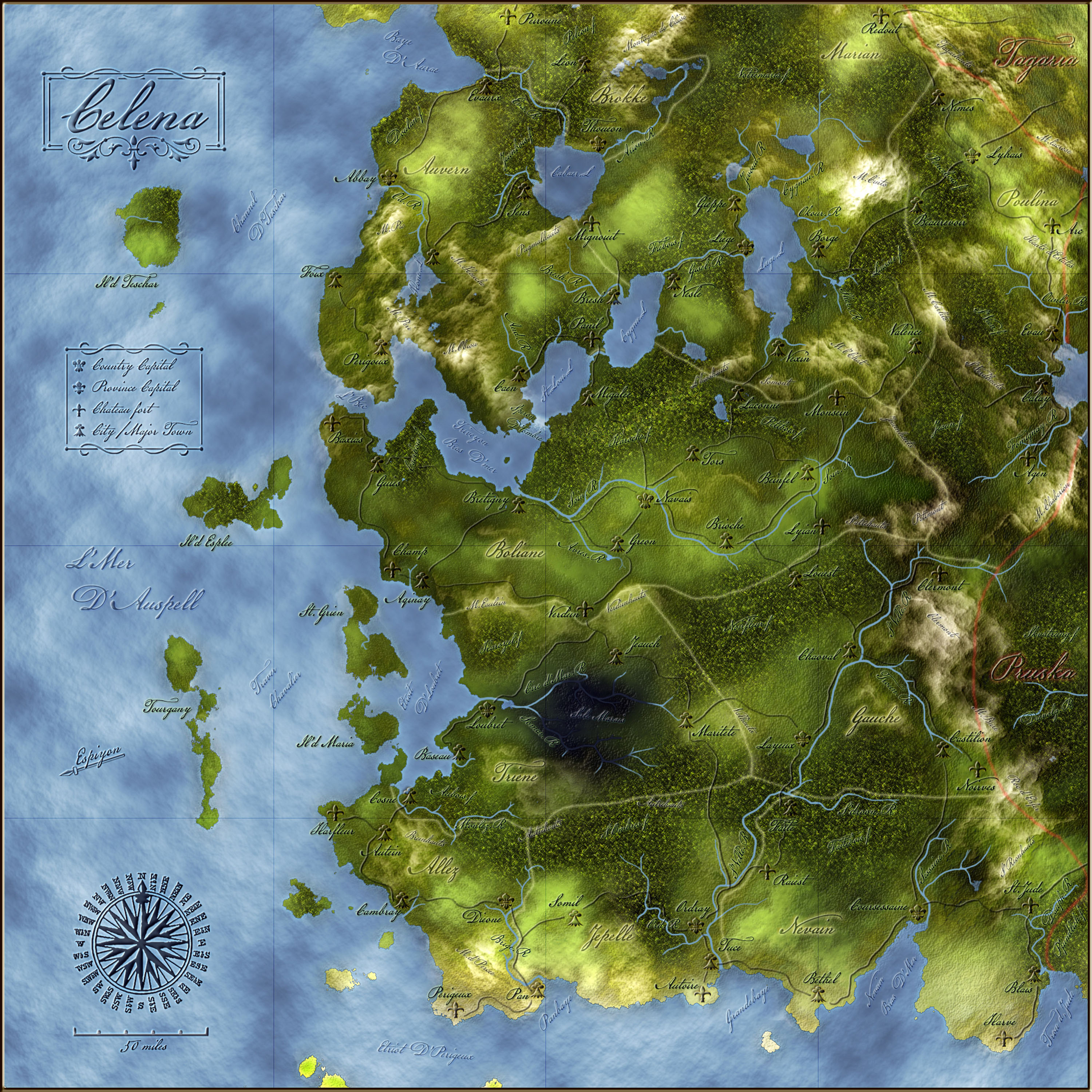 It's pretty big but if you click it then right-click&view image you'll get it in all its glory!

I created it for a French musketeer style game I was running but any of you feel free to high-jack it for your own purposes (I can provide an unlabelled version if anyone needs it)
Last edited by fifty on Thu Aug 29, 2013 2:22 pm, edited 1 time in total.
Orbis Terrarum - British swords, sorcery & science - now on DrivethruRPG

fifty, THAT is impressive.
I survived the forum move 4 times... yeah, I feel old.
Top

Thanks ThroughTheWell! It takes a while to do but it's worth it IMO!

I like it 50. and I even think I recognize the tutorial that you have followed,
only thing that bugs my eye is your march area, looks like you have simply added a layer of black to the area, and the labeling of "fela marais" have not been recolored to keep up with that.
oh, and a bit to "soft" edges between forest and normal planes... but that's just a taste question.

all in all.. great work

Thanks LooksAtYouFunny, It was my first real effort, and I'm still learning so there's plenty of room for improvement!

Here's a city area map in the 'planescape' style - I drew it for a friends free scenario on planewalker.com :Desire and the dead. 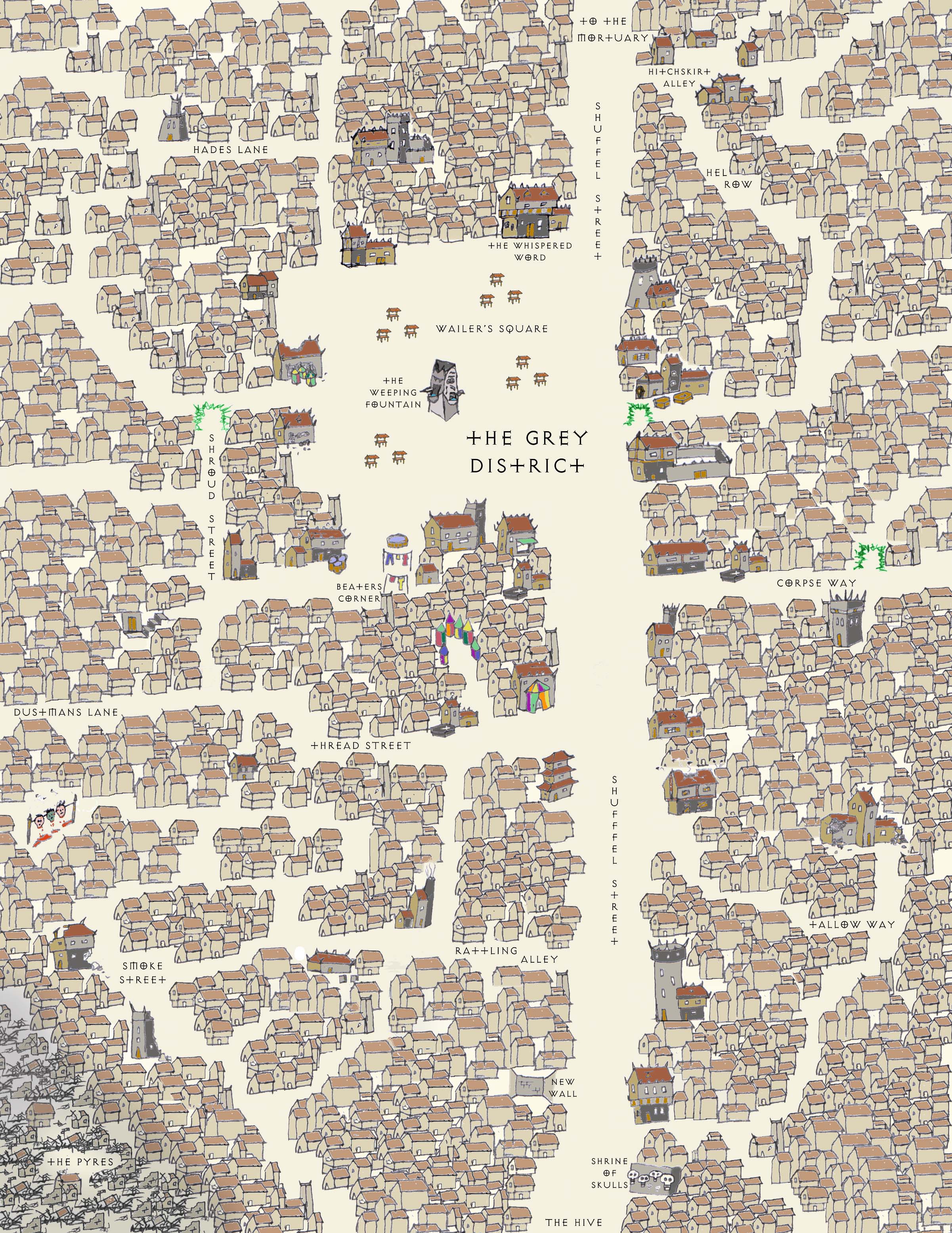 That's really awesome, how did you get the random effects for the houses? or did you place them at random yourself.
The wishing fountain - a game for everyone
Top

Thanks BadgeAddict and thinkslogically, The style was intended to emulate the "official" sigil map style from the TRS planescape scenarios.

...and yep, I drew out a few little blocks of houses and then placed and layered them all by hand!

fifty wrote:Thanks BadgeAddict and thinkslogically, The style was intended to emulate the "official" sigil map style from the TRS planescape scenarios.

...and yep, I drew out a few little blocks of houses and then placed and layered them all by hand!

Damn... Are you using Photoshop or GIMP?

Either way... you could make a random(Animated) brush instead, that is what I use for both trees, houses and mountains...
Just to make your life more simple...
-Best regards LAYF
Top

LooksAtYouFunny wrote:
Damn... Are you using Photoshop or GIMP?

Either way... you could make a random(Animated) brush instead, that is what I use for both trees, houses and mountains...
Just to make your life more simple...

Photoshop .. and yeah I know how to do brushes and things now, but I drew this map several years ago when tbh I just didn't know how to use PS properly then!
Orbis Terrarum - British swords, sorcery & science - now on DrivethruRPG

Ok so here's a fairly old one I hand drew and coloured later on PS. 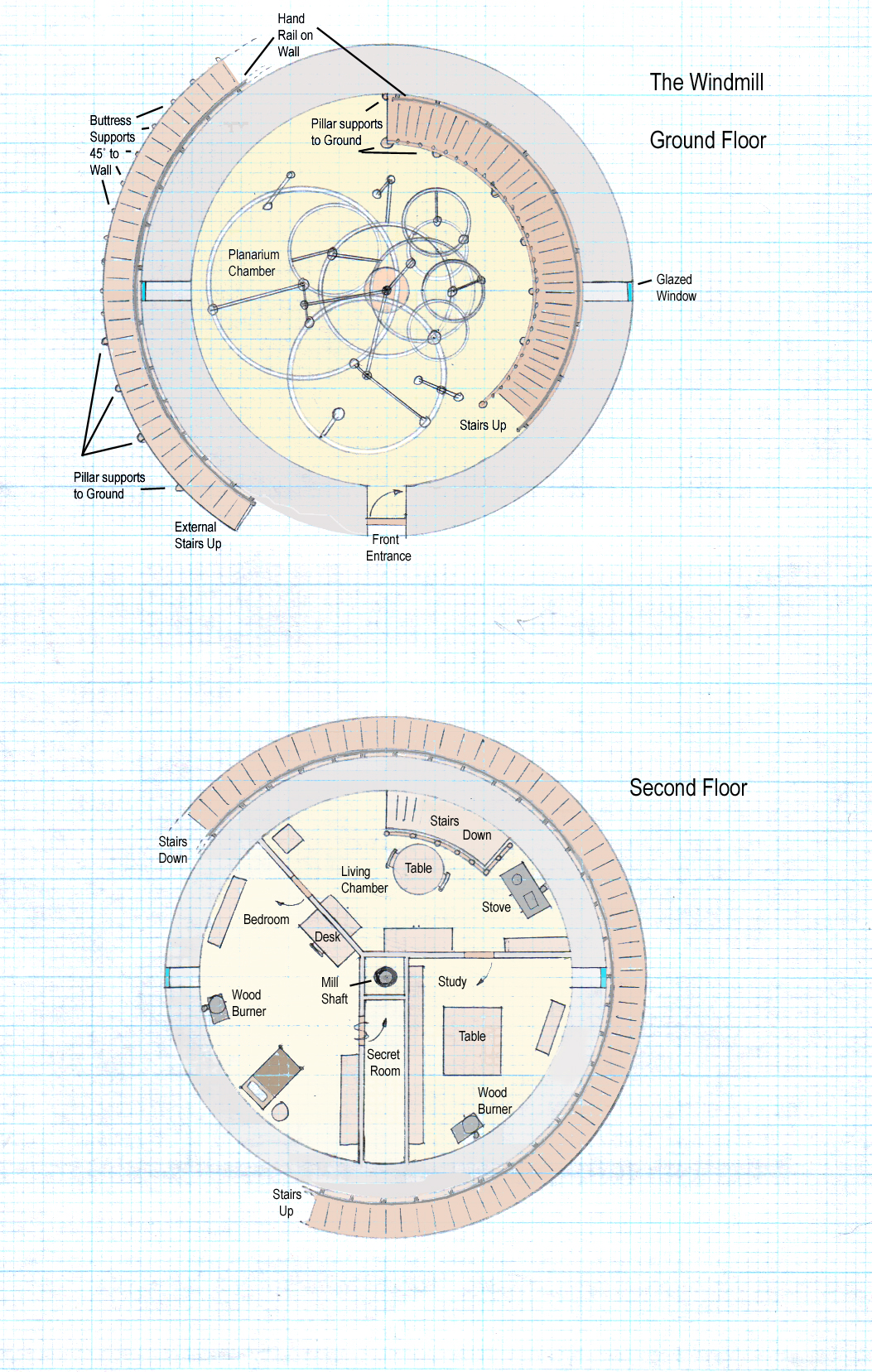 ..the entire top floor pivots with the direction of the prevailing wind... 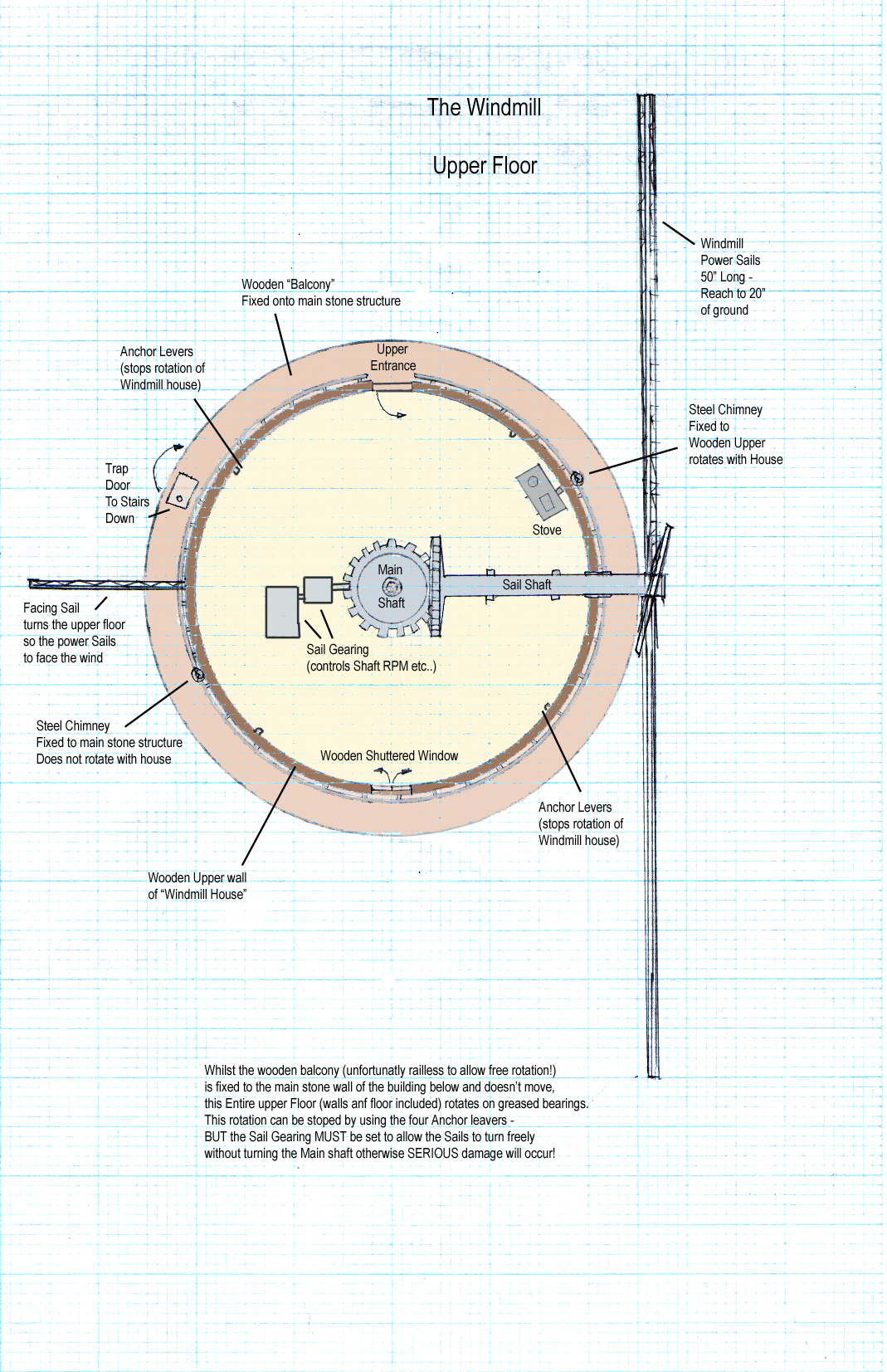 Wow, nice.
Complains of Everything in Minelings.
Boro in Call of Ctulhu - Filipstad
Boro in Unhallowed Isle
Boro in Civilization V
Boro in Cavemen

In God School as Dies in Battle

My own game! Castle Story Open for everyone!
Top

really lovely, the windmill reminds me of those old once you also see in the Netherlands

only thing I can think off that might improve it would be to add some "age" to the graph paper,, but all in all... really cool
I love the idea of having a windmill driven planetarium 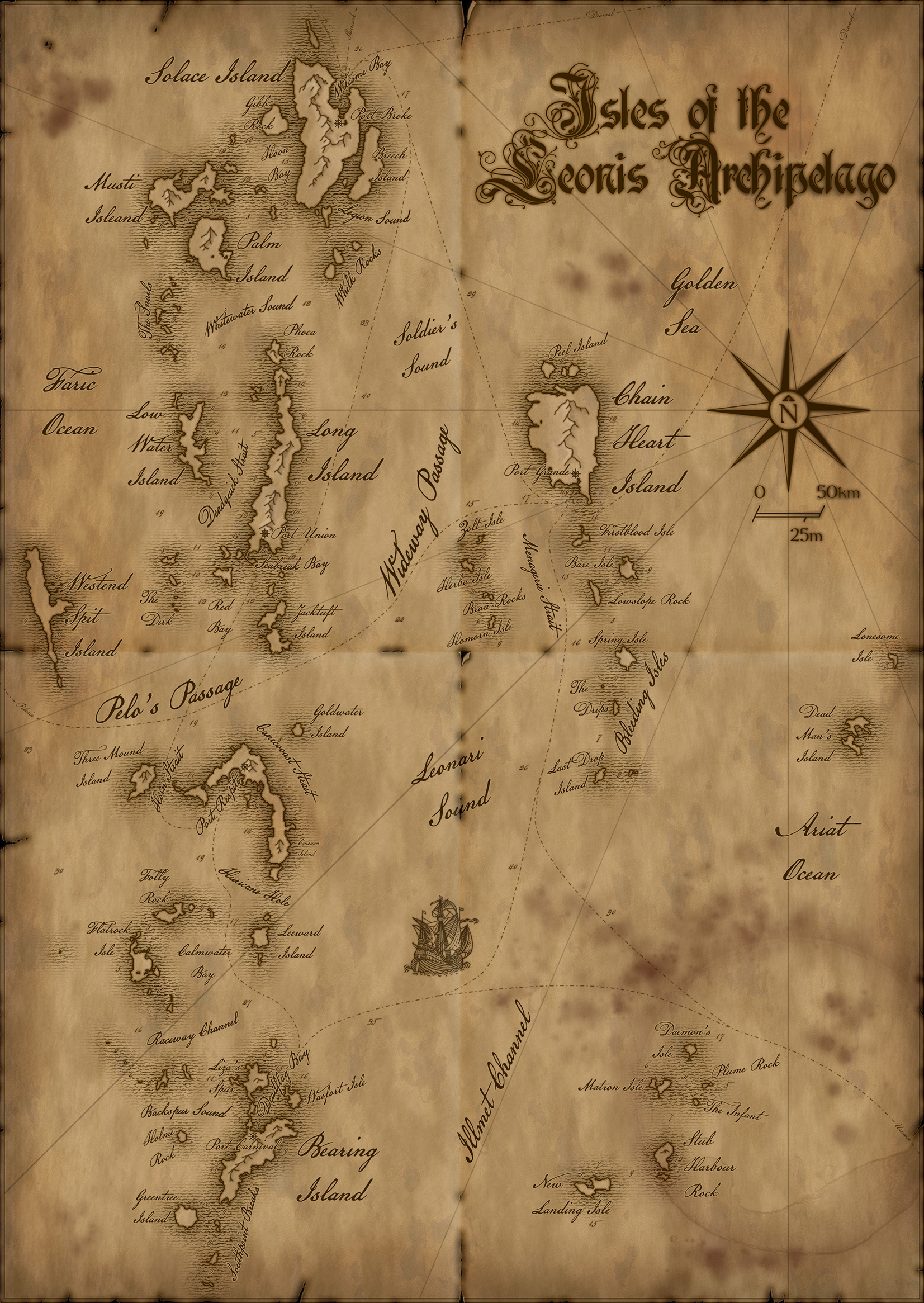 It was particularly challenging as this is a new style for me and involved lots of hand drawn elements. Still I reckon it looks suitably grubby and used!

Fifty, that looks amazing. I only have 2 minor dings. To the right of Bearing Island you have a "channel" that is way to big for the word channel or passage. You could make it a channel by crowding it more, or just drop that descriptor. The other ding is the upper right title Isles of archipeligo... seems overly redundant to me. Call it the X archipeligo and be done with it. Again, this looks like you studied some actual charts. I'd think this is pro work for a game or something if you did not tell me you made it yourself.

Grr, the image resized on me. I could see it all at first, and now I can only see half of it. You might consider adding the icon for a wreck somewhere, as those tend to be navigation hazards, and they can further crowd a passage.

Okay, zoomed in I see a few more issues. "Hurricane hole" is not placed in a hole; you curve the writing through a passage. Wrong name for that spot. Some of your Rocks are bigger than some of your Islands. I'm not too keen on mixing Isle and Island, but at least show some sizing consistency RE Rocks.
I survived the forum move 4 times... yeah, I feel old.
Top

Archipelago : A group of islands
isle: an island or peninsula (esp. a small one)

(ex: The British Isles)
or
(The Japanese Archipelago)

This is merely to show an example of TTW's nit-pickiness..

Personally, i don't give a crap about such a small thing, because i think it's amazing.
The wishing fountain - a game for everyone
Top

. I don't mind anyone's nit-picking, all C&C is cool! but thank you BadgeAddict, it's my best effort so far I think, so I'm glad you like it!

@TTW actually in reality a 'channel' is just a navigable body of water that connects two others and along with 'passage', 'sound', and 'strait' are all fairly interchangeable.
'Rocks', 'islands', 'points', 'Isle's', 'penninsula's' etc.. are entirely subjective or down to common/local usage too.

I can't speak for the global position, but as a sailor who's spent time on real seas around the British 'isles' and knows the charts a little bit I'd say you don't usually find much consistency.

e.g. the 'isle' of Whithorn on the Scottish coast is actually permanently connected to the mainland, the Channel 'Islands' of Jersey, Guernsey, Sark, etc... are tiny in size compared to the 'isle' of skye or 'isle' of lewis. etc... or even the 'isle' of wight which is in the same 'channel'.

..in any case, thanks for your thoughts!

...I'll be sure to bring it up with the poorly educated ships navigator that went and named marine features willy-nilly on his chart next time I'm aboard

*Hesitant as i am to quote Wikipedia as a source they sum it up well:
"In a larger nautical context, as a geographical place name, the term channel is another word for strait, which is defined as a relatively narrow body of water that connects two larger bodies of water. In this nautical context, the terms strait, channel, sound, and passage are synonymous and usually interchangeable. For example, in an archipelago, the water between islands is typically called a channel or passage.
http://en.wikipedia.org/wiki/Channel_%28geography%29"
Orbis Terrarum - British swords, sorcery & science - now on DrivethruRPG

So I've been looking at the map after your comments TTW and actually I think your right, in as much as the 'new landing' group of features maybe don't form enough of a "thing" on the one side to make a channel in the eyes of a navigator..

I still don't think I'm gonna change anything cause I think i'm still up with the ides that real world features have sufficient "whatever fits" as your naming them to make sense? ... besides I'm on a new project now so 'use or lose' as whatever you want!

Next one is a slightly older one, It's supposed to be a duergar town built on huge stalagmites rising up out of a now flooded cave, but I guess with a little imagination it could be turned to other use? 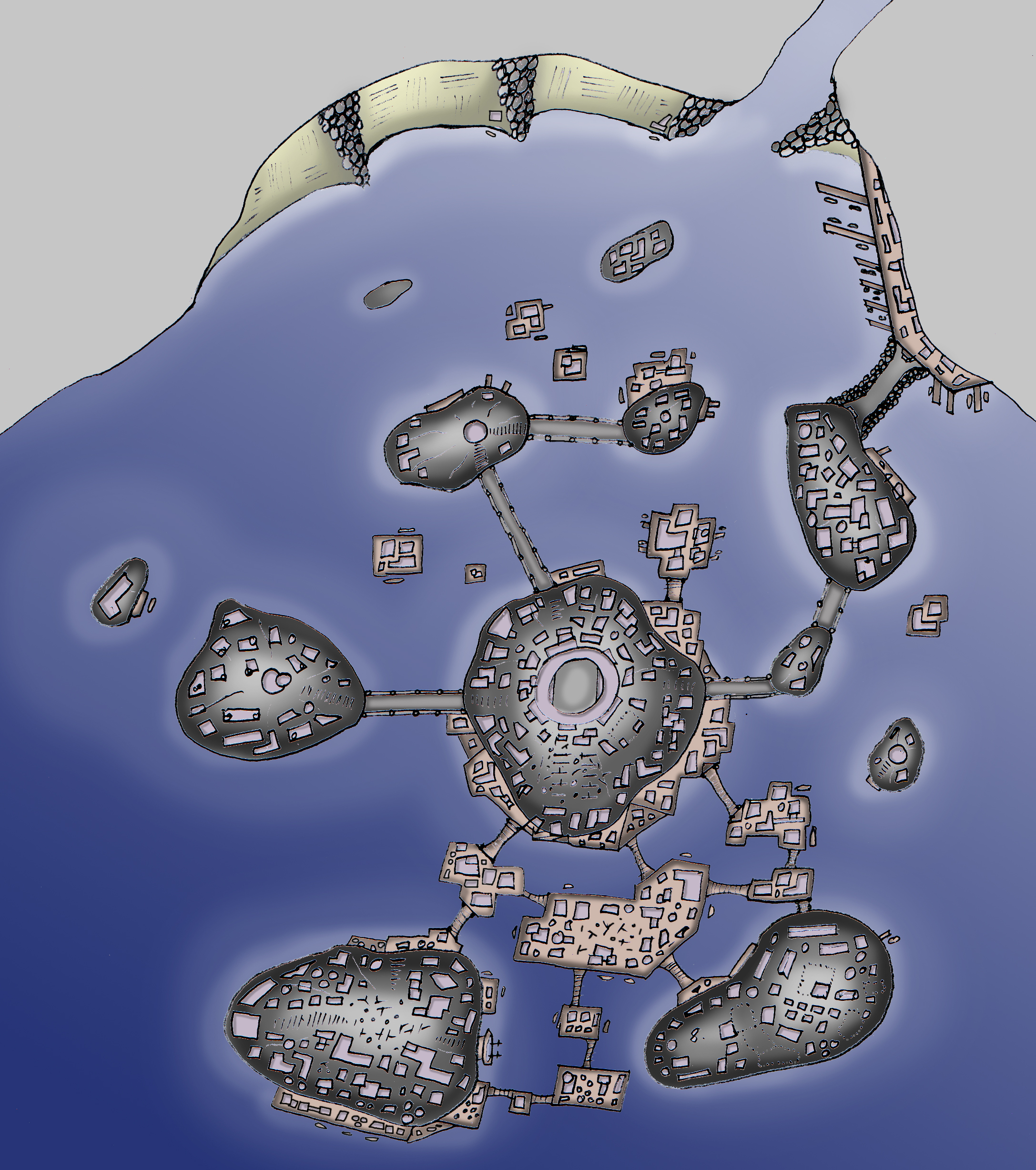 This is the opening level of a 3 level dungeon map that was used as the design for the "Halls of the Mountain King" Open design adventure released back in 2009.

Its an abandoned Dwarven stronghold, partly collapsed and if I remember rightly, now overrun with goblins. 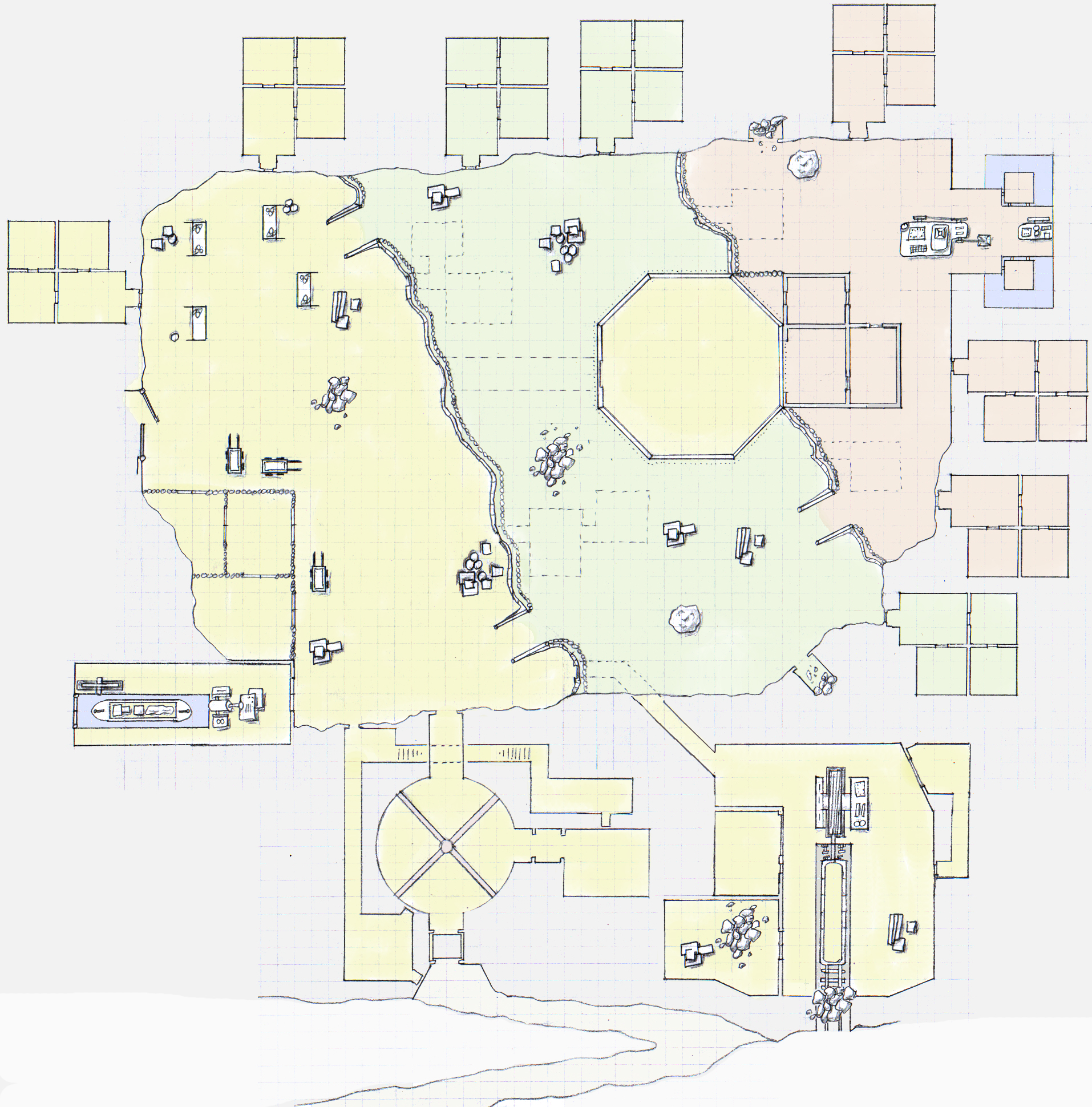 Hall of the mountain king you say? Sounds familiar, doesn't it Thinks?
Complains of Everything in Minelings.
Boro in Call of Ctulhu - Filipstad
Boro in Unhallowed Isle
Boro in Civilization V
Boro in Cavemen

In God School as Dies in Battle

My own game! Castle Story Open for everyone!
Top

So... Since no one answered.. I made a small java program.

what it does is, it takes one PNG image and turns into a map with 5*5 pixel sprites

to show you:
► Show Spoiler
it takes this image:

Then it takes each single pixel and replace them with a 5*5 sprite according to this image:

Then it put it over another image: (This image must be 5 times bigger than the original, and can contain buildings and all that, but can also be blank) To make a map in the style Me and Nerre uses: The "sprites is a single image, allowing up to 17 different sprites in any color. each representing the colors used in the map (17 predefined colors, such as black, red, blue and green)
if anyone would like these things, just PM me

@fifty:
I really like how that new one looks hand drawn, yet, looking closer, one can see that there is copy paste work in place... really good work on making it "hand drawn"

There are small things, but they have been said already